Go Forth Working for Stirling 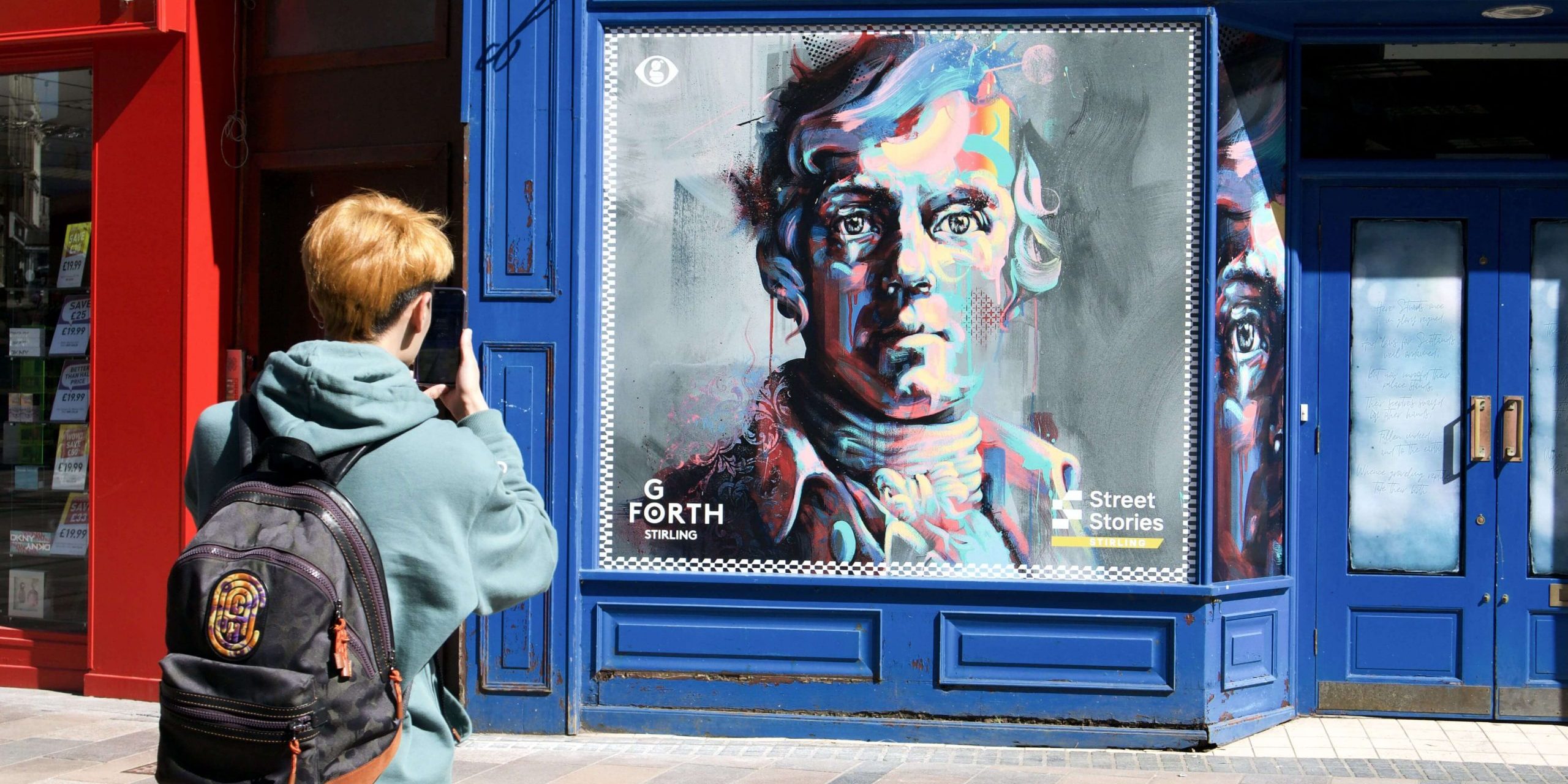 Go Forth Stirling is one of the 37 active BIDs (Business Improvement Districts) in Scotland working to enhance the high street experience and deliver projects specific to their business community’s needs.

A Background of Business Improvement Districts

A BID is a geographical area in which the local businesses have voted to invest together to improve their environment. Essentially, they are an agreement between businesses to improve commercial enterprise in a particular location.

The levy collected from local businesses is used to develop specific projects and initiatives which will benefit all business trading environments in the local area, increase footfall and generally provide support to businesses. These improvements can include providing additional services or projects, outside of what the local authority already covers. It can give these businesses and authorities vital funding, resources, and the opportunity to realise the potential of an area more quickly.

BIDs were first established in Canada and the US in the 1960s and now exist across the globe including in South Africa, Germany, Japan, New Zealand and Australia. Legislation enabling the formation of BIDs was passed in 2003 in England and Wales and in 2006 in Scotland. There are now 333 BIDs across the UK as a whole and now over 1500 worldwide.

Benefits of a Business Improvement District include:

– Businesses being more autonomous and influential around what happens in their local area
– Improving the area can attract more customers, resulting in more income (and therefore potentially more employment)
– Networking opportunities for new and growing ventures.
– All monies invested or raised remain in and are reinvested in the local area.

Go Forth is headed by Project Director Danielle McRorie-Smith who is responsible for the vision and direction of the BID, devising and initiating its many projects, liaising with members of Stirling’s business community and running the organisation’s day-to-day operations. She is supported by Digital Communication and Community Engagement Officer Jitka Fleglova who is in regular contact with the BID’s levy payers. She also administrates the organisation and runs its social media platforms.

The BID Street Ambassadors Gail Lamb and Josie Brown are the ‘eyes and ears’ of Go Forth Stirling in the city. They carry out a variety of roles including listening to the concerns of business owners, tackling graffiti and helping tourists gain the best possible experience of Stirling. They also log and report any street issues each day. The BID also has a 13-strong non-executive Board led by Chairman David Black who also chairs Stirling City Heritage Trust.

The Board is made up of local business owners who help shape the BID’s strategic direction and ensure the organisation carries out the aims of its Business Plan.

Go Forth has been working for Stirling for just over five years and has accomplished many fantastic things during that time. One of the highlights is the ground-breaking Street Stories project, which transforms empty shops into vibrant works of art. The initiative, which can be seen in vacant shop windows around the City, features a range of animated artworks showcasing the work of Scottish artists including Jacqueline Marr and Michael Corr. Each artwork is brought to life via interactive Augmented Reality (AR) and forms part of a Trail telling the stories of Stirling’s people, heritage and history via mediums such as mosaic, dance, mural, digital, and fluid art.

They’re also proud of bringing Bricklive’s Fantasy Kingdom tour – a fantasy trail featuring life-sized brick models of dragons, castles, wizards and princesses – to Stirling. The magnificent free Lego Trail was unlike anything Stirling had ever seen before – it entertained residents and visitors alike and brought 8,000 people to the city.

Another project which has made a real difference to Stirling is their Supercharged Shopfront Improvement Grant, which has revitalised the look of the city centre. Business owners were able to apply for a grant of up to £5K to give their shopfronts a facelift, and many took up that offer. Highlights of the project include the transformation of Greek family restaurant Café Aina (King Street) with a fresh look which includes restored marble signage and a completely new and improved shopfront for the Fone Express store in Upper Craigs.

In the Thistles, Go Forth contributed to internal ‘wayfinding’ signage, which directs shoppers to retailers based in the centre. Meanwhile, the 17th century Pend (lane) – which leads to The Pend Café Deli & Bistro and Frances Hunter Hair & Beauty in Port Street – has been beautifully renovated with the archway’s original stonework restored and the introduction of new lighting and planters.

The Next Five Years

The team were delighted with the results of their re-ballot in the Summer which saw business owners give a resounding ‘Yes’ to a second term. Danielle McRorie-Smith (Director) says: “Our second term began in September 2022 and our ambitious five-year plan includes better street cleaning, ongoing free public Wi-Fi in the city centre and the continuation of our popular grant schemes.”

There are also plans for new events including an enhanced winter festival and the introduction of annual business awards beginning next February. Other key proposals include tackling parking concerns, introducing improved wayfinding and signposting around the city and addressing the number of vacant properties in Stirling.

Danielle elaborates: “We will react to and manage whatever the business community requires through dedicated support and lobbying; maintaining current projects and services and evolving to introduce and develop new initiatives. We also aim to invest £1.8M in Stirling during the second term, with projections based on the amount of capital from levy payers plus the extra grant funding the BID expects to leverage.” 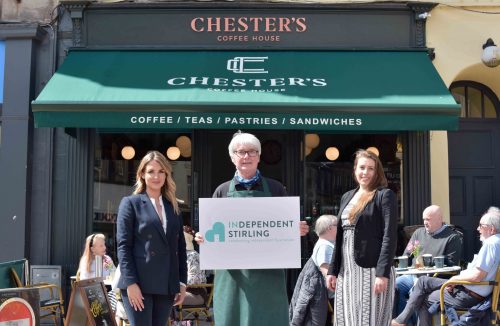 There have been many amazing success stories over the past five years but here are some of the highlights that the team shared with us.

The Street Ambassadors have proved a real hit with the business community and visitors. Since they began work just over a year ago, they’ve made great strides in tackling environmental and anti-social issues such as graffiti, listening to business owners and taking on board/feeding back their concerns and signposting visitors around the city.

Go Forth established an online training platform in April 2020 to offer business owners the opportunity for flexible, cost-free training. Since then, 7,500 courses have been have enrolled in the diverse range of more than 20 CPD-accredited courses which include all levels of Food Safety and GDPR. 620 individuals have now been certificated in Go Forth’s Fire Safety Training Course. The programme is particularly aimed at the city’s hospitality sector, which was hit hard by pandemic restrictions, and includes the Alcohol Licensing Awareness (Scotland) training course which is mandatory for all staff involved in serving or selling alcohol. Details of this course and all the available training options are available on the Go Forth Stirling website – www.goforthstirling.co.uk/online-training

Last year, Go Forth and Stirling Council joined forces to launch a free Wi-Fi service covering the entire city centre. Residents, business owners, shoppers and visitors can access the service via their smartphones or other devices anywhere in the city centre. The move boosted local investment in internet connectivity and digital transformation and saw the BID achieve one of the central goals set out in its original five-year business plan. 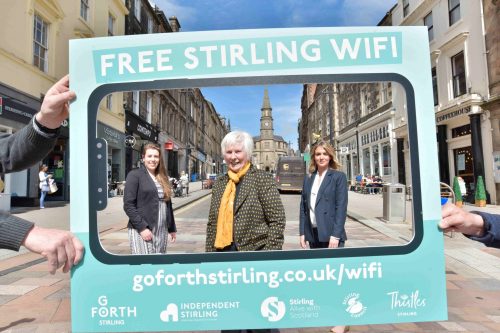 The website is supported by a wider social media campaign which includes photos and videos to promote businesses and an ‘I’m In’ sticker initiative to display in shop windows and highlight Stirling’s independent culture. It also includes a promotional video showcasing the flourishing independent scene and featuring more than 20 businesses.

Businesses in Stirling that are not technically in the BID geographical area can still be part of the BID. Go Forth offers a voluntary levy scheme which means any business outwith the current BID zone, but within the Stirling Council area, can become a member by paying a yearly levy linked to their rateable value. Businesses in areas such as Causewayhead, Bridge of Allan and Riverside are welcome to come on board and be part of the BID.

The Future is Exciting

Danielle highlights their plans: “We’re very excited about our forthcoming Independent Stirling Business Awards which launch in November and take place in February next year. Planning is underway and the event will feature a variety of Awards Categories – including Café of the Year and Hair & Beauty Business of the Year – plus a special Outstanding Contribution to the City Award.”

The Awards are open to all independent businesses in the city centre BID zone and they will be nominated and voted for by members of the public and the business community. They will then be presented by a special guest at a glittering Awards Ceremony at the Golden Lion Hotel on Thursday, February 23, 2023.

– £165K invested in festive lighting – ALL NEW lights coming this winter
– The BIDs public WiFi network has kept 60K people connected in the city centre since its introduction
– 84 businesses have had a grant from Go Forth to help with flooding, their shop front improvements, their ecommerce or to assist start-ups.
– The night-time economy is connected by a pubwatch committee, a network of digital networks and an incident crime reporting system provided by the BID
– A 50K project introducing technology to monitor each street’s footfall and vehicular traffic 24/7 has just completed

BIDs across the British Isles represent 121,485 businesses and contribute £172 Million to their business communities.

BIDs may leverage additional monies from government, project funding and the like: Go Forth has leveraged an additional 300K in the past two years.

11 new BIDs are currently at development stage in Scotland. (53 across the UK).

A sign that the business community recognises the continued importance of BIDs and what they provide to the local trading environment!