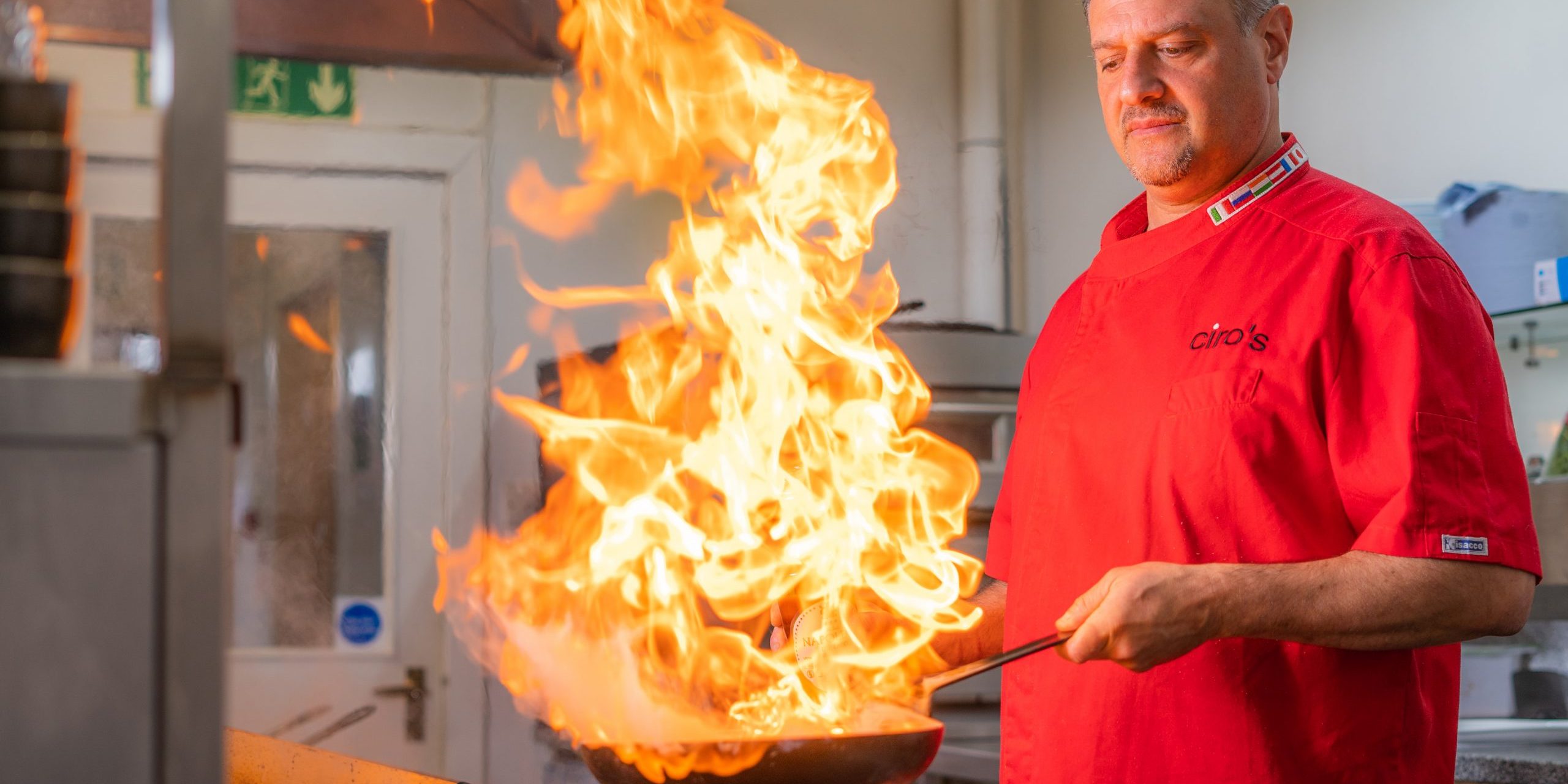 There’s a new restaurant in Forth Valley and everyone is talking about how great it is! We were delighted to get the chance to interview Ciro and Nikki, owners of Ciro’s Italian Restaurant at Glenbervie Golf Club.

The couple have always been destined to run their own hospitality business. Ciro started working in his Uncle’s pizzeria at the age of 12 and never looked back! His dream was to always have his own restaurant and after 25 years of hard work in Italy, Switzerland and Scotland, he finally succeeded and opened their first Ciro’s in Callander in 2007 along with his wife Nikki. Nikki’s family had always been in business, so this also came naturally to her.

The restaurant power couple have quite the love story. They met in 1993 in a pizzeria in Switzerland, where Ciro was working. Nikki was working at private summer camp nearby. Ciro is originally from south of Pompei in Italy and Nikki also has Italian heritage. She says, “My mum used to tell me never marry an Italian! So, what did I do?  I married Ciro!”

When they were first getting to know each other, they spoke to one another in French as that was their only common language. They were quickly engaged and in 1996 Nikki brought Ciro home to Scotland. They were married in 1997 and started their family. Ciro was gaining experience working in Italian restaurants in Edinburgh and Nikki started childminding while they raised their two children, Fabi and Cameron. They then went into business in Kirkcaldy with a partner and ran La Gondola.

In 2007, they decided to move to Callander as there was the opportunity to have their very own restaurant there. Nikki says, “Our two kids were five and six at that point. We had been looking around the country to open an Italian restaurant and this wee restaurant in Callander was up for sale. It needed a lot of work, but we were up for the challenge.“

Nikki then made the connection that her maternal Great Nonna, had moved to Callander from Italy.  Everything about the decision felt right. She says, “Everything happens for a reason.”

They had a great first year then the 2008 recession hit. Nikki says, “Going to a restaurant was the last thing people were doing. We didn’t know what to do so I got a part-time job at a self-catering holiday place eventually becoming the full-time the manager and I loved it. I ended up working there for eight years which allowed us to keep paying our staff and keep the business going.”

In 2017, Nikki was becoming fed up and wanted to get back into the restaurant. They were getting ready for the busy season, which in Callander is from May-July when tragedy struck. The top flat above their restaurant caught fire. Nikki explains, “It was a bank holiday weekend and we were all set up to be busy. It was like watching a movie watching the building burn. It took hours and hours for them to get the fire out and it destroyed all the roof. Our restaurant was destroyed by water. It was devastating and we were in shock as we had just lost our livelihood.”

But, when there is a will there is a way. One of their regular customers came to Ciro and Nikki with an opportunity within Loch Tay Highland Lodges. They needed someone to run the restaurant there so the couple took the spirit of Ciro’s and created Ciro’s @ Loch Tay. They wanted to keep his name going as they had built up a strong reputation during the ten years they were in Callander. Nikki says, “We ended up being at Loch Tay from 2017 to 2020. While we were there we won ‘Best Family-Owned Italian Restaurant’ at the Italian Awards.”

In 2020, the couple were beginning to get itchy feet as they wanted a restaurant that was fully theirs once again and then the pandemic struck. Towards the end of 2020 the opportunity to bring Ciro’s to Glenbervie Golf Course in Larbert was brought to them. Nikki says, “We had a chat and immediately knew this was our new home!” They have been open to the public since April 2021 and are quickly becoming a firm favourite in the Forth Valley food scene.

Nikki says, “Opening Ciro’s at Glenbervie is the biggest thing we’ve ever done. We now have 24 staff, all local! Plus, our two grown up kids also work in the business. We hope this will be our last place until we retire!”

At Ciro’s, they serve delicious, authentic Italian cuisine. Everything has to be right, from the food to the service and atmosphere. They are lucky to have a tremendous view over the golf course, which diners just love! They treat their customers like family with Ciro making regular visits to front of house to check on his happy guests! He still is in the kitchen daily making sure that every dish is perfect.

They are currently preparing for their first festive season in Larbert and have a special menu available for the whole month of December. This can be viewed on their website. Group bookings are also available!

Go Forth Working for Stirling
November 21, 2022